More serious collectors came into being and the oldest Philatelic Society is the Royal Philatelic Society in London which was formed on the 10th April 1869. From there on stamp collecting became a recognised and supported hobby with an associated support network of like minded individuals.

Today when we talk about stamp collecting we are talking about the collecting and sorting of postage stamps and postal related material that has been designed to be sent by a recognised postal authority.

Some people collect single country stamps such as New Zealand or Brazil. This is a traditional view of stamp collecting. Others collect stamps that are related to a particular topic or theme such as Birds or Dogs or Medicine. This is called Thematic collecting where the collector focuses on the picture on the postage stamp relative to the theme that they are collecting.

A newer form of collecting and exhibiting is where people collect both philatelic and non-philatelic material and bring this together into a collection around a theme, very much the same as thematic collectors would do. This area of collecting has become very popular with both youth and adult collectors and open up a wide variety of subject and collecting areas. 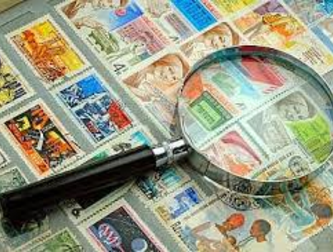 So what is this Philately or Stamp Collecting all about?  stamp collecting has been called the hobby of kings and the king of hobbies. The first postage stamps came into existence in 1840  when the Penny Black was issues. By 1861 the first stamp catalogue was issued in France with the first illustrated catalogue following later that year.

Unfortunately the first collectors were more interested in using the stamps to either stuff into pillow cases or paste onto the walls !